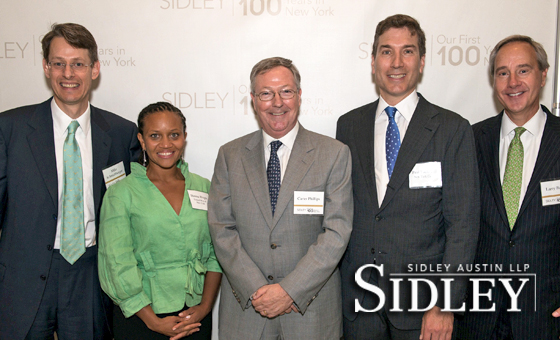 (New York, NY, June 26, 2014) – New York Cares today announced that it has received a $500,000 gift from Sidley Austin LLP, as the law firm commemorates 100 years in New York City. The firm is celebrating its anniversary by giving back to the community, with an additional $500,000 gift to the United Way of New York City.

“We are overwhelmed by the generosity of Sidley Austin,” said Paul J. Taubman, President, Board of Directors of New York Cares. “This year, to celebrate their 100th anniversary in New York City, Sidley is again investing in the future of New York City by helping New York Cares to better meet its mission of mobilizing volunteers across the five boroughs.”

Through New York Cares, Sidley Austin has been a long-time champion of adult education and job readiness programs. The law firm is also an active participant in the full range of New York Cares programming, and – in the past five years alone - has engaged almost 1,800 employees and clients in volunteer projects.

“New York Cares is an indispensable nonprofit organization in New York City. It is a privilege for Sidley to support their efforts to help more than 400,000 New Yorkers in need, through volunteering and financial commitment. New York Cares has become part of the fabric of our corporate responsibility efforts and we are gratified to be able to make this donation to further their work,” said Michael J. Schmidtberger, managing partner of Sidley’s New York office and a member of the firm’s Executive Committee.

“Sidley stepped in with a gift to New York Cares in 2006, to commemorate the fifth anniversary of 9/11,” said Gary Bagley, Executive Director of New York Cares. “We are incredibly grateful that once again, the firm is helping to ensure that more New Yorkers in need can benefit from our programs. Sidley not only has supported New York Cares financially, but it has supported us with staff resources by encouraging its employees to volunteer to make New York City an even better place to live.”